“Twenty years from now you will be more disappointed by the things that you didn’t do than by the ones you did do. So throw off the bowlines. Sail away from the safe harbor. Catch the trade winds in your sails. Explore. Dream. Discover.” — Mark Twain 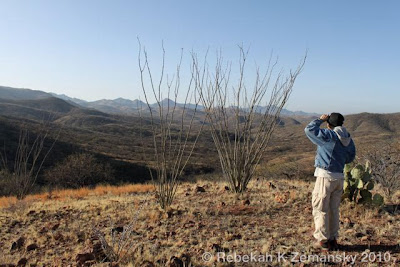 Here’s what I’ve been up to – to see the rest of the my team’s updates, go here.

The people that I’m writing about move through this land, sometimes on a daily basis — they include hikers and hunters, law enforcement and humanitarian volunteers, and the people illegally crossing Arizona’s section of the U.S.-Mexico border.

With the land playing so much of a role in the stories I'm reporting, I decided early on that I needed to see it and experience it for myself. On my first trip I was confident that I'd kept track of where we'd parked the jeep — only to be completely wrong. During the second trip I witnessed dramatic shifts in weather and vowed to be better prepared next time. Most recently, exhausted from the heat, I felt my head swimming despite all my efforts to stay fit, rested and hydrated.

There are rewards — glimpses of elusive wildlife, the fiery wildflowers, unforgettable sunsets. But people who underestimate the harshness of this area are taking a huge risk. 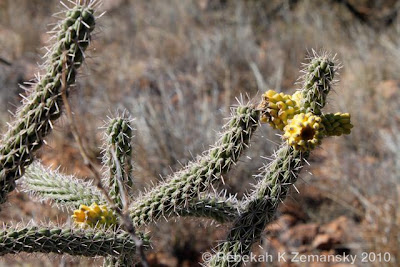 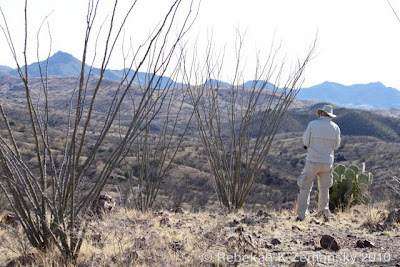 Tonight, the Burj Dubai opened, renamed as the Burj Khalifa. Many made it downtown to the event, including some of our team from ASU, and even more watched the event from all over the city including this group near the Mercato Shopping Mall in Jumeirah. But the event wasn’t just about a building opening – the 4th of January is 4th anniversary of Sheikh Mohammed becoming the ruler of Dubai – check out the last picture of the Burj al-Arab wishing him the best. A few more photos can be found by posters like nileshzw, who’s already linked photos to the Burj Khalifa’s location on Google Maps, as well as more coverage through Gulf News and Dubai City Guide.

If you look backwards at my blog, you’ll see why I’m visiting Dubai and some of the recent news I looked at before I came. I’ll be updating shortly on the trip so far – including how I ended up trying something completely new, spontaneous, and totally unexpected – so check back to see what’s been happening and what will happen next.

Also, while you’re here, tell me what you think about fireworks – what’s your favorite kind, favorite color, or favorite fireworks memory?

It’s really interesting here – so many amazing buildings, and most of them empty! Also, I’ve seen women wearing the black abaya my friend living in Saudi Arabia was discussing – I’m not sure I could pull it off, I’m warm in the light long sleeve shirt I wore for dune smashing yesterday. I’m also very curious to see what the New Year’s Event tonight will be like. The place we’re going has two night clubs, and I really don’t know what to expect.

This morning, we’ll see a couple of things, including the Emirates Hills which I understand is to be a sustainably built housing development, and then we’ll have a break in the afternoon which I hope to use to get a few pictures up, if I can get through the school filters, which don’t like images.

Here’s the announcement – after a little bit of background information on the United Arab Emirates and, in particular, the emirate of Dubai.

Dubai has been in the news a bit this fall – like the rest of the world, the country’s finances are less ideal than they have been in the past. Recent coverage in US media includes Wall Street Journal‘s Dubai: A High Rise, Then a Steep Fall on Dec 4 and the New York Times‘ photo essay Dubai’s Improbably Tale.

This Monday, the BBC reported more mixed news, with Abu Dhabi gives Dubai $10bn to help pay debts and Gulf News had this article: Dubai issues new legal framework to deal with Dubai World disputes. All this may be especially relevant to Phoenix, given the relationship between the two cities.

As far as regular and background information, one of the best sites is Gulf News. More coverage can often be found through Al Jazeera English and the BBC’s regional coverage.

To finish the background information, you can’t talk about Dubai without talking about the construction…

So, why all the information about Dubai? Well, when I posted this October entry, I had just heard about an opportunity – I was in a hopeful mood, and now that it’s finalized, I can make a bit of an announcement…

I’ll be taking a trip over winter break through ASU Study Abroad. The program is called A Tale of Two Cities – Dubai and Phoenix. It’s led by Jamil AlShraiky who specializes in healthcare design industry at ASU’s Herberger Institute for Design and the Arts. As for the troup, we’re an interdisciplinary bunch including students from design, healthcare, and journalism programs. The blog is already up here.

Yes, I’m REALLY excited, and yes, I’ll be writing about it. How much will be posted live from on-site will depend on internet access, which has been described as “really good dial-up…we’re sure it will work if your computers are right.” But there will definitely be somethings as the trip unfolds, as well as (probably tons of) pictures by mid-January when we get back.

Aaron Brown has two jobs. By day he’s a mild mannered journalism professor at ASU‘s Walter Cronkite School in downtown Phoenix. By night (or at least, by summer) he jets all over the world from Mozambique to Jordan for his PBS series “Wide Angle.”

OK, so maybe a slightly exaggerated version of the truth. Regardless, this evening he combined the two and spoke to a mostly student group about journalism, interviews, and broadcasting from abroad. He emphasized the importance of finding compelling characters to tell the story, and gave tip like to use silence for drawing out “the most honest thing” from your interview. “if you’ve spent time with me, you’ll know I think television enters through your stomach and works its way to your brain,” said Brown, adding that for his stories he needs “a visceral reaction.”

This can be tricky when working overseas, because along with the expenses and tight scheduling, it’s difficult to do all the same pre-reporting that’s possible on your home turf, Brown said. The pressure is higher, too, because “you know you may not get a second chance at something” whether it’s filming or recording. In response to student questions about the changing media world, Brown said “the best way you can make yourself valuable is to learn something.” Reporters should “go find good stories, go find good characters – if you want to worry, worry about that – the rest can take care of itself – but you all need to be better at that, finding good material.”

In the interest of full disclosure, I’m not unbiased when it comes to Brown. One of the odd ways in which my parents influenced me is by mentioning, frequently, the people they appreciate. I heard very often how they’d watch Brown in their Seattle days. It’s been some time and changes since then. I never expected that someone I grew up hearing about this way would be someone I’d actually seen in person let alone pass in the hallway on a regular basis, and it leaves me a little more tongue tied than it’s cool to admit. Yet one of the things I’m growing to appreciate about journalism and reporters is that so far, all the ones I’ve met are more than willing to sit down and talk about what they do. Brown is no exception to that precedent, and once again, I felt I learned a lot.

Thanks to The East Valley Tribune for the picture above.